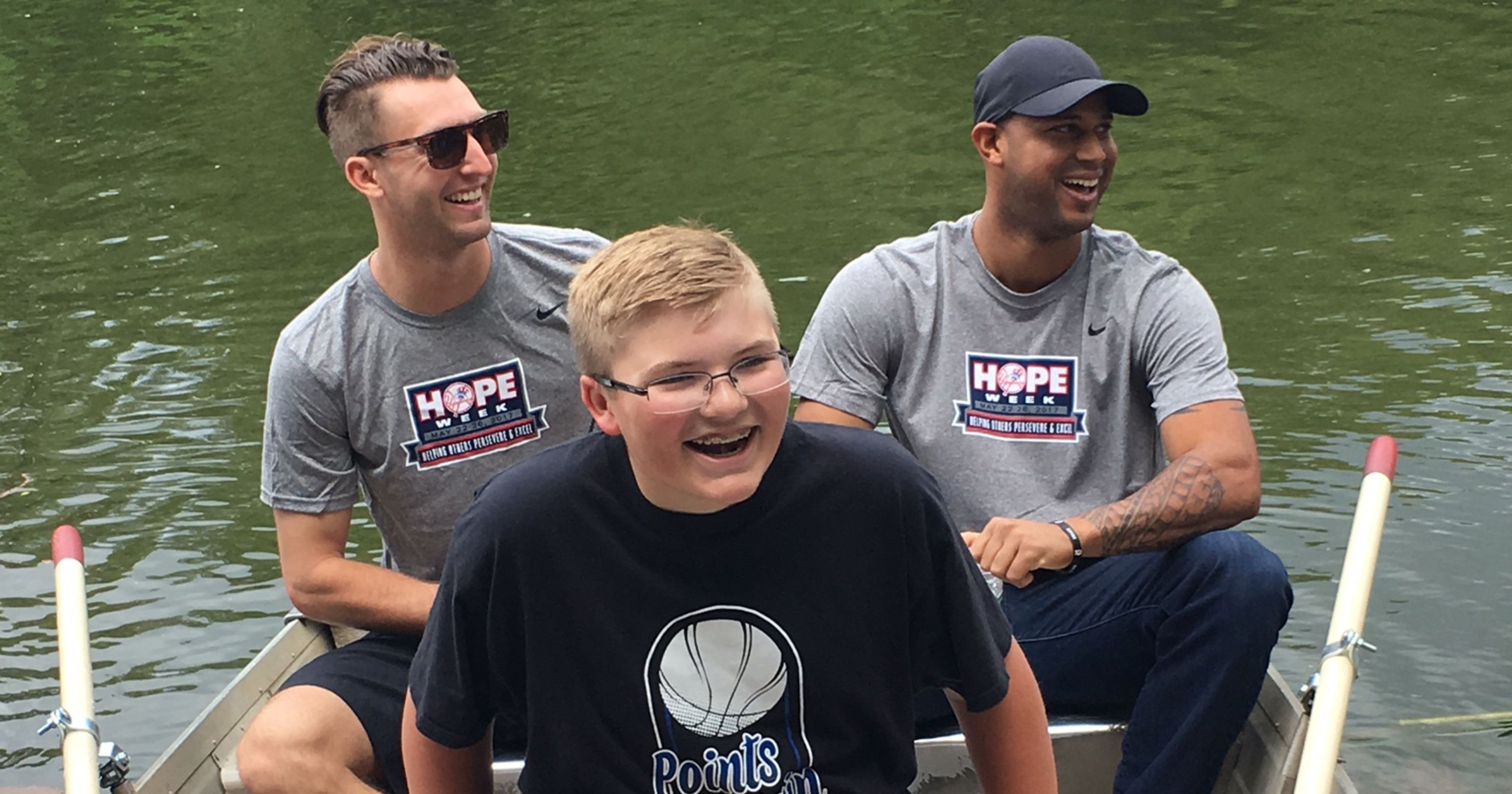 Posted at 18:01h in Hope by freedomoftruth 0 Comments
0 Likes
Share

There may be no more quintessential New York experience than a sunny afternoon in Central Park. To conclude the ninth annual installment of HOPE Week, the Yankees visited those lush surroundings on Friday to recognize 14-year-old Tyler Cashman, the founder of “Points for Pain.” 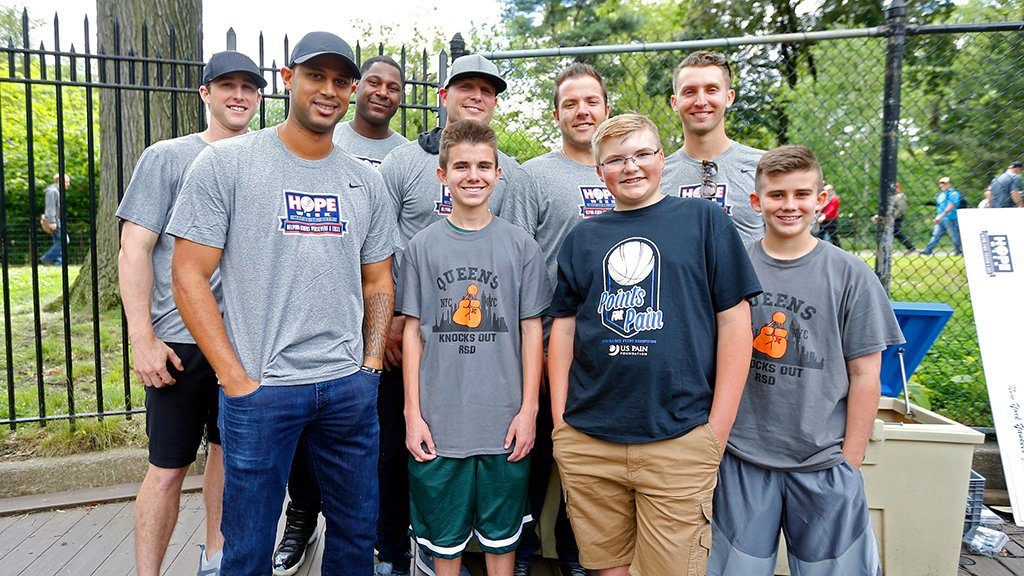 Chris Carter, Aaron Hicks, Matt Holliday, Bryan Mitchell, Austin Romine and Chasen Shreve joined Cashman and his family to row on the lake, race radio-controlled sailboats and enjoy a picnic in the grass. The Yankees made a $10,000 donation to the U.S. Pain Foundation.

“I think anytime you find causes that are worth making more known, and seeing people that are so giving of themselves and their time, it’s really cool,” Holliday said. “The Yankees take an opportunity to promote or make these things known. It’s a great way to use their platform. I think that’s something that the Steinbrenner family takes a lot of pride in.”

Cashman had been told that his day trip was to see the Broadway play “Aladdin,” and he appeared to be stunned when the Yankees walked onto the docks of Central Park’s Loeb Boathouse.

While Cashman, Hicks and Shreve spent time chatting and spotting turtles in the lake, the players’ competitive side spilled over, as Mitchell and Romine raced and playfully splashed Cashman’s boat. The players also tossed a football around before donning sailors’ caps on the Conservatory water. 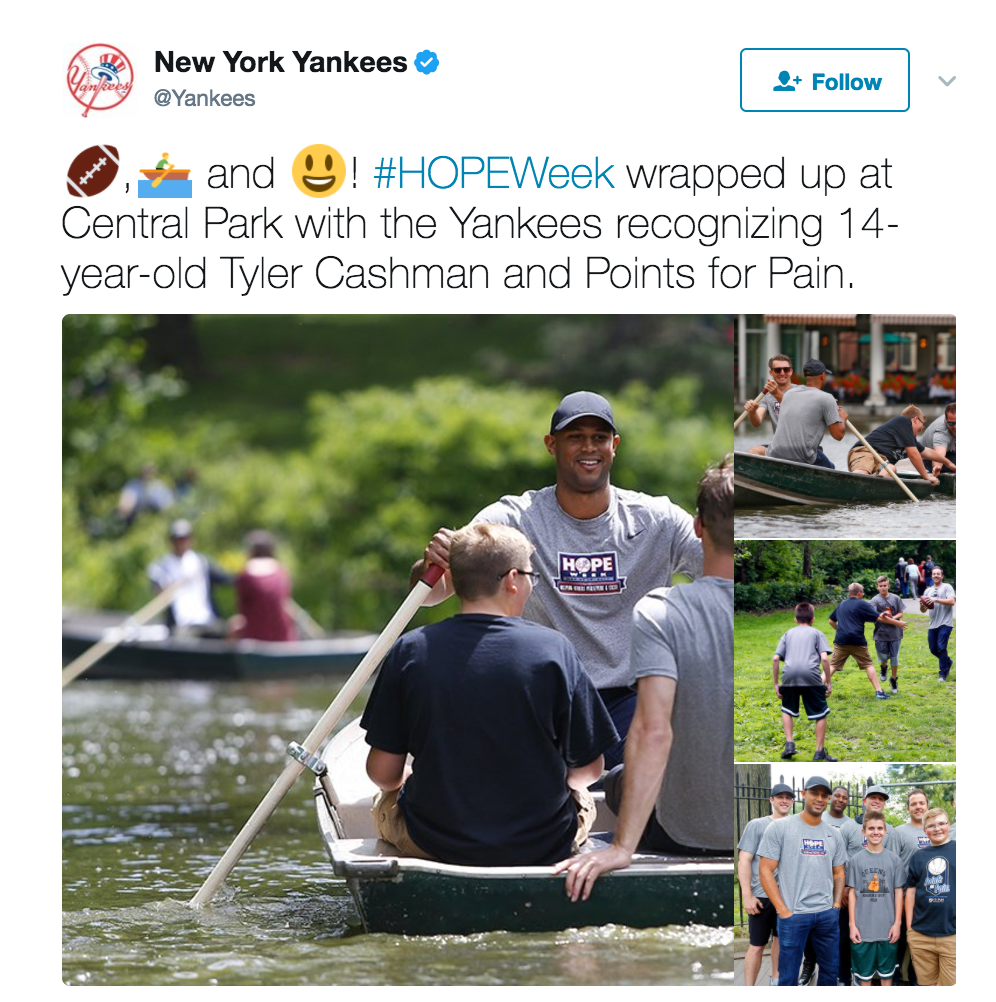 “I like Broadway, but this is like 10 times cooler,” Cashman said. “It’s really awesome, to know that what I’m doing is getting out there, even to the Yankees. I think it’s amazing.”

Cashman was inspired to help people living with chronic pain by his mother, Casey, who has been living with reflex sympathetic dystrophy (RSD) since a 2008 procedure on her right foot. It is characterized by severe burning pain, pathological changes to the bone and skin and extreme sensitivity to touch.

As a seventh-grader, Tyler used his position as the manager of the girls’ basketball team at Old Turnpike School in Tewksbury, N.J., to start a program where fans could donate based upon how many points the team scored. He also makes speaking appearances, where he hands out magazines and bracelets.

“He is one of the most remarkable, inspirational young men I know,” Casey Cashman said. “He only cares about others before himself. It’s really what he stands for. His statement has always been, ‘I can’t take away their pain, but I want to do whatever I can to help them and raise awareness.'”

Funds collected from the “Points for Pain” initiative went to the U.S. Pain Foundation’s Pediatric Pain Warriors Program, which allows children living with chronic pain to attend a two-week summer camp — the Center for Courageous Kids, in Kentucky. To date, Cashman has raised more than $25,000.

“To hear their stories, it makes me feel bad and sad for them,” Cashman said. “I wanted to do something to help.”

Cashman’s work has inspired others, including 11-year-old Derek Kilpatrick of Queens, N.Y., who organized a walk at his school, JHS 194, to honor his brother, Tyler, who lives with a chronic pain condition. The Kilpatrick family also participated in HOPE Week on Friday.

“My hope is to just keep getting the word out,” Cashman said. “That’s the most important thing, so people know. Some of the kids don’t feel accepted. I want to make sure that they feel accepted and understood.”

Read more about Cashman on mlb.com