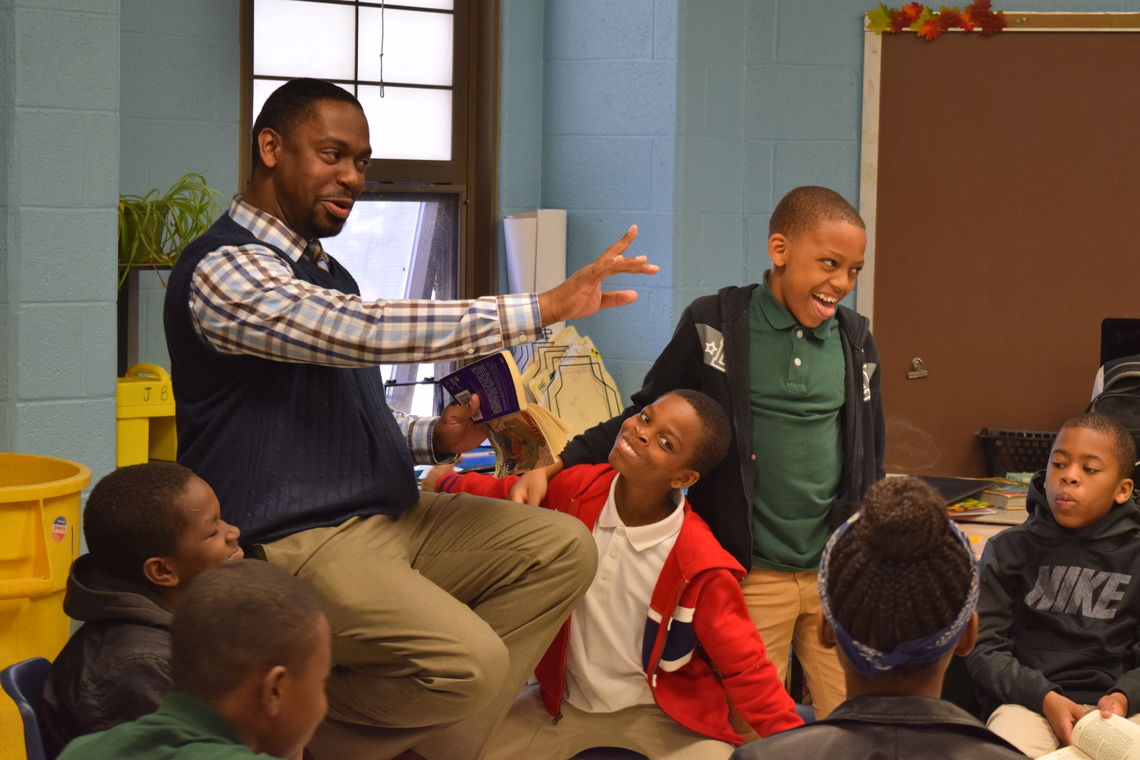 Posted at 18:32h in Hope by freedomoftruth 0 Comments
0 Likes
Share

A study found that it benefits students’ graduation rates and college aspirations to have more African American teachers. But their numbers are dropping.

Kelly fifth-grade teacher Stephen Flemming leads a spirited discussion about bias in writing and the use of metaphor. His students say he inspires them to be successful.

Stephen Flemming is one teacher in one classroom, but he may be doing as much to keep his low-income black students in school – black males in particular – as any formal program targeted toward “at-risk” students.

Flemming teaches English language arts to 5th graders at John B. Kelly Elementary School in Germantown. All but three of his students, spread over three homerooms, are African American.

Of the District’s teachers, just 4 percent are African American males, like Flemming, and he’s one of a mere handful at the elementary level.

In his spacious classroom, some of the students, especially the boys, are so eager to participate that they can hardly stay in their seats. One boy grasps a basketball and occasionally bounces it. Flemming doesn’t tell him to put it away.

Arrayed in a circle, they are discussing a book featuring a bullied high school student, learning on this Tuesday morning about how to spot bias in writing and the use of metaphor. Flemming, in his 10th year at Kelly, darts up and down inside the circle, coaxing out answers, prodding for more, lavishing praise, and all the while conveying an infectious enthusiasm about what they are reading and about school itself. He knows how to keep the discussion at a high level and also how to rein it in.

After the lesson, 11-year-old Jordan Smith marches up to a reporter and starts answering questions before they are asked.

“If you’ve got a problem, he’ll talk to you,” Jordan says of Flemming. “Seeing a black man teaching us actually changes our lives. We can be believing that we can be anything we want.” 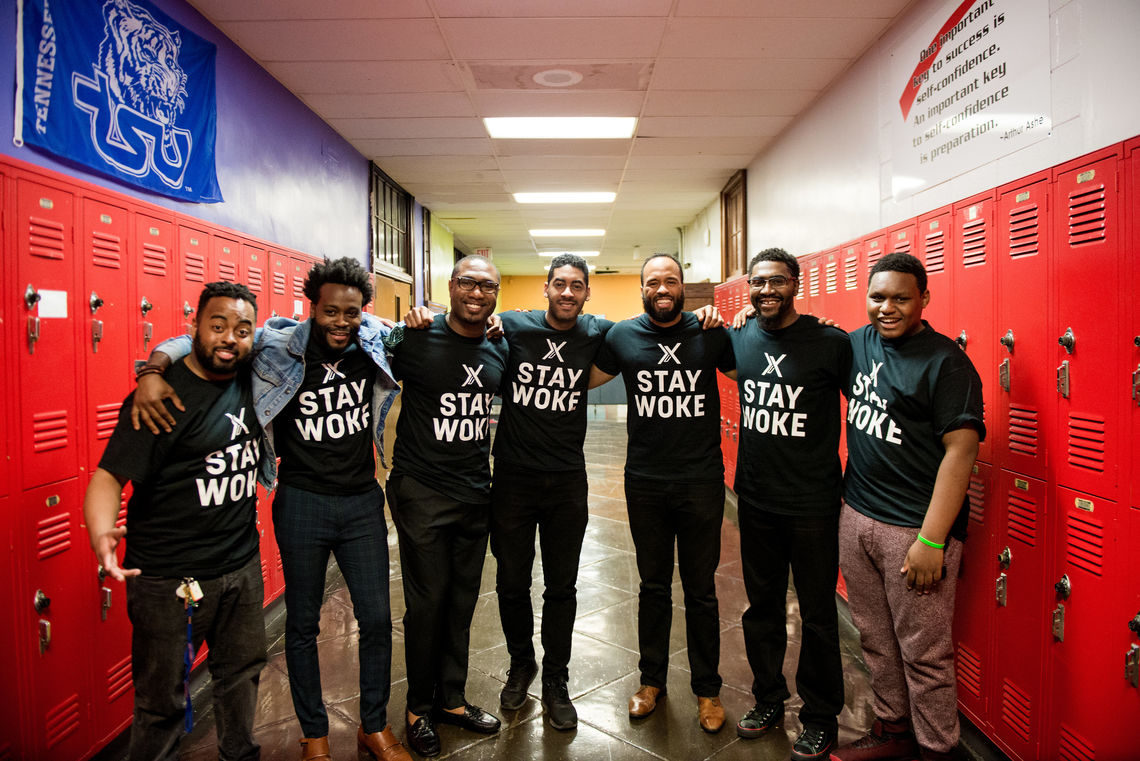 Instantly, there is a crowd of boys, all echoing the same thought.

In March, Johns Hopkins University economists released a study showing that low-income black students randomly assigned to at least one black teacher are more likely to graduate from high school and aspire to college. The researchers tracked through high school all 100,000 students who entered 3rd grade in North Carolina between 2001 and 2005. The results were especially profound in the early years: Having just one black teacher during grades 3-5 increases “persistently low-income” black boys’ interest in pursuing college by 29 percent and decreases their chance of dropping out of high school by 39 percent. For black girls, the effects were smaller, but still significant, regarding college aspirations.

The “striking” results, the researchers said, are evidence that “stubbornly persistent attainment gaps are not impervious to policy changes” that would result in having more black teachers in America’s classrooms. Such a campaign by universities and school districts could significantly improve the life chances of African American students, especially boys.

“We’ve known this,” said Vincent Cobb, a co-founder with Mastery-Shoemaker principal Sharif El-Mekki of the Fellowship of Black Male Educators. The group’s goal is to bring 1,000 more black male teachers to Philadelphia by 2025.

“We’ve been having this conversation,” Cobb said. “We know that the earlier we’re involved, the bigger the impact we can have to build their confidence and change the trajectory for the rest of their lives.”

Yet the trends in Philadelphia, in Pennsylvania, and nationwide, are the opposite.

In the District, black teachers are dwindling as a percentage of the whole – once more than a third, black teachers now make up less than a quarter of the total. And the number of Black males is less than 5 percent, or fewer than 400 among 8,000 teachers. (Data for charter schools are not easily obtainable.)

Over the last three years, the number of black male teachers in the District has inched down from 396 to 379, even though the number hired for this school year, 76, tripled the total hired in the year before.

That is more than twice the national average of 2 percent, but still very low for a district in which half the students are African American.

Overall, the number of education majors has gone down by 55 percent, but for African Americans, it has decreased by 60 percent. For black females, the decline is 39 percent; for males, 64 percent.

“If you look at the national data, there are now more African American majors in STEM and business,” said Del Pilar. “There’s a shift away from education in general.”

A lot of that is due to a negative perception of the teaching profession, he said – low salaries, high stress, demands to increase test scores, and erosion of teacher autonomy. Requirements that teacher education candidates pass skills tests to enter the field are also deterrents for people of color, he said, due to the cost and to lower rates of passing.

Pennsylvania is looking at “promising models,” said Del Pilar, to better prepare teachers and attract a more diverse pool, including teacher residency programs that place prospective teachers in classrooms for a year instead of a few weeks. Del Pilar also touts movements such as the Fellowship of Black Male Educators, whose May convening he attended.

“That type of grassroots initiative can do as much as we can do on a state level,” Del Pilar said. “We think they can have an impact in production of diverse educators.”

Superintendent William Hite has also attended several meetings of the Fellowship and considers it an important resource. Philadelphia is actively working to attract more black male teachers, including a recruitment campaign at historically black colleges and a teacher residency program that puts a priority on diversity.

“We believe that our teachers should reflect the population they serve and serve as role models for all of our children,” Hite said. “Students across Philadelphia will have a better educational experience as we continue to diversify our teaching population.”

“While Philadelphia has more teachers of color than the nationwide average, we still have more work to do.”